An introduction to German cuisine

When we think of food in Germany, it’s easy to imagine plenty of delicious sausages and tankards of beer. And while you won’t be disappointed with this expectation on your cruise holiday, there’s so much more to the cuisine.

Indulgent pastries, humble fish dishes and glorious breads are all staples of the German diet. The country’s most traditional dishes are paired with new and exciting craft beers, alongside its more famous weissbeers (wheat beers). Visit one of Northern Germany’s iconic beer halls to pair your refreshment with a tasty pretzel or sausage. 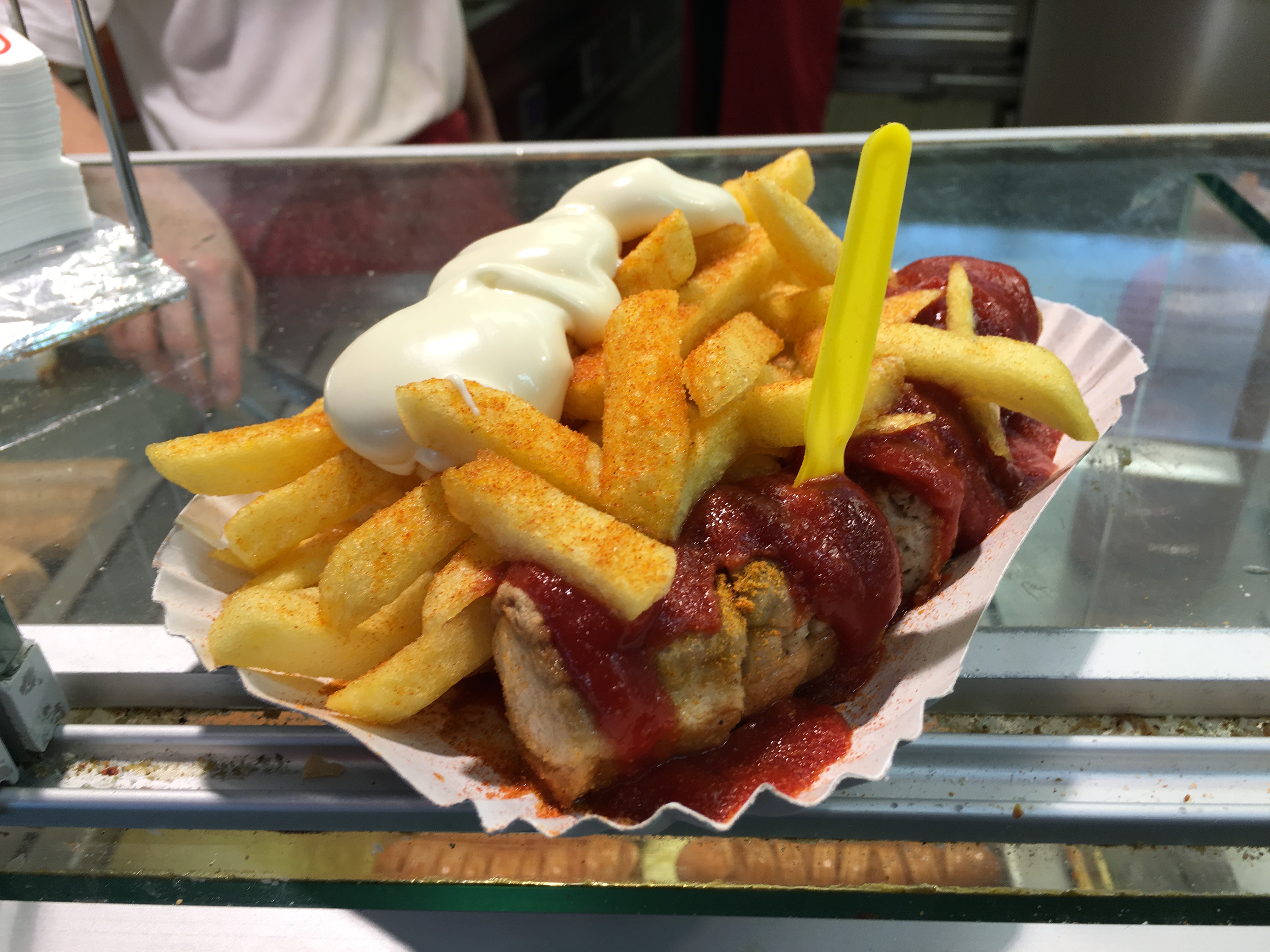 Despite superfoods such as quinoa and goji berries sweeping the globe, Germany has been on-trend for some time with its winter warmer, grünkohl (kale). Traditionally, the kale is stewed for many hours and served with delicious smoked pork and fried potatoes. Although the country is no stranger to vegetables, dubious foodies will be pleased to know that almost all healthy ingredients are paired with mouth-watering meats or sauces. 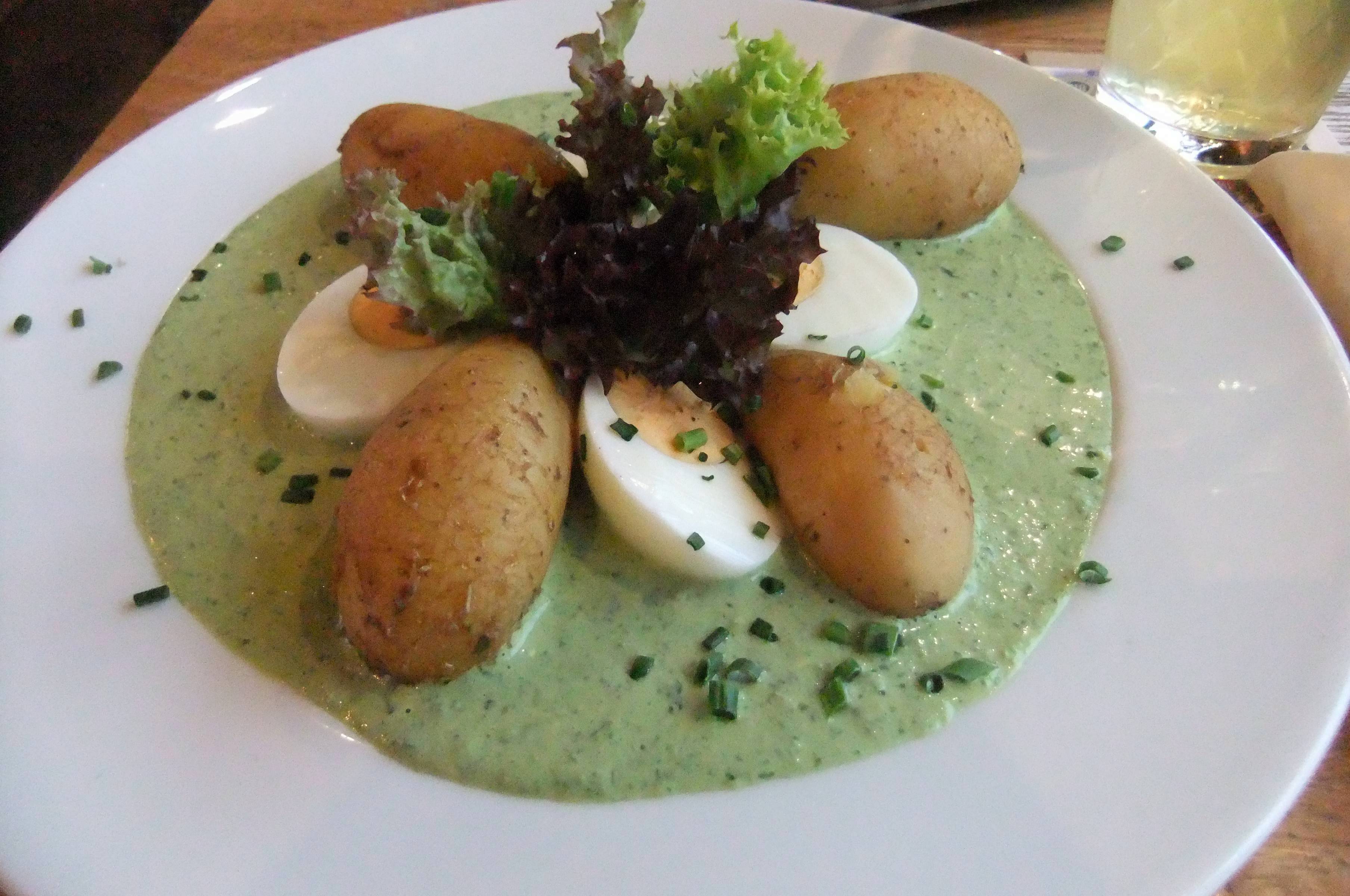 “This might come as a bit of a surprise to those who think Germany food is all pork and potatoes, but for me, Germany food is all about seasonal eating,” said Christie Dietz of A Sausage Has Two. “Many Germans are fanatical about eating with the seasons, shopping at farmers’ markets and cooking with local produce. This means that ingredients are celebrated with wild abandon when they come into season, often with festivals, the crowning of various fruit and vegetable kings and queens and seasonal dishes aplenty.”

Christie, originally from London, moved to Germany in 2010 and has developed a taste for the country’s traditional cuisine. When asked about her favourite dishes, Christie said: “Frankfurter Grüne Soße - Frankfurt Green Sauce - which is a cold sauce made from seven herbs grown only in Frankfurt, and served with boiled eggs and potatoes. Tafelspitz mit Meerrettichsoße, or boiled beef, covered in a fresh horseradish sauce and Krustenbraten - roast pork with crackling, often served with beer sauce and dumplings.”

If you’re visiting Germany on a Baltic cruise and have limited time at your stop, take Christie’s advice on board: “Don’t just make a beeline for the sausages! I’d recommend seeking out the regional specialties wherever you are. Traditional German restaurants will always have local favourites on the menu; staff (and your fellow diners!) will be only too happy to share suggestions.”

As well as national favourites such as currywurst and pretzels, Hamburg has a few delicacies of its own. Finkenwerder Scholle, named after a district of Hamburg that was once a fishing village, is a baked or pan-fried plaice with bacon, onions and shrimp from the North Sea. Plaice is one of the most commonly eaten fishes in Northern Germany, so a cruise on the Baltic Sea is the perfect opportunity to sample this traditional dish.

If you’re brave enough to join Germans in their love affair of pickled food, tuck into a plate of labskaus. This popular traditional dish is made of corned beef, mashed potatoes, onions, pickled beetroot, pickled gherkin, herring and a fried egg. Another iconic Hamburg dish is its eel soup. This unique sweet and sour soup is made with meat broth, beef, vegetables, fruit, dumplings and eel.

For those with a sweet tooth, you can’t leave Hamburg without trying rote grütze, a dish made with red summer berries and milk, vanilla sauce or ice cream. Although originally introduced by Denmark, it has become a tradition of Northern German cuisine. Franzbröchten, a tasty sweet pastry with butter and cinnamon, is also a staple of Hamburg and can’t be found anywhere else. 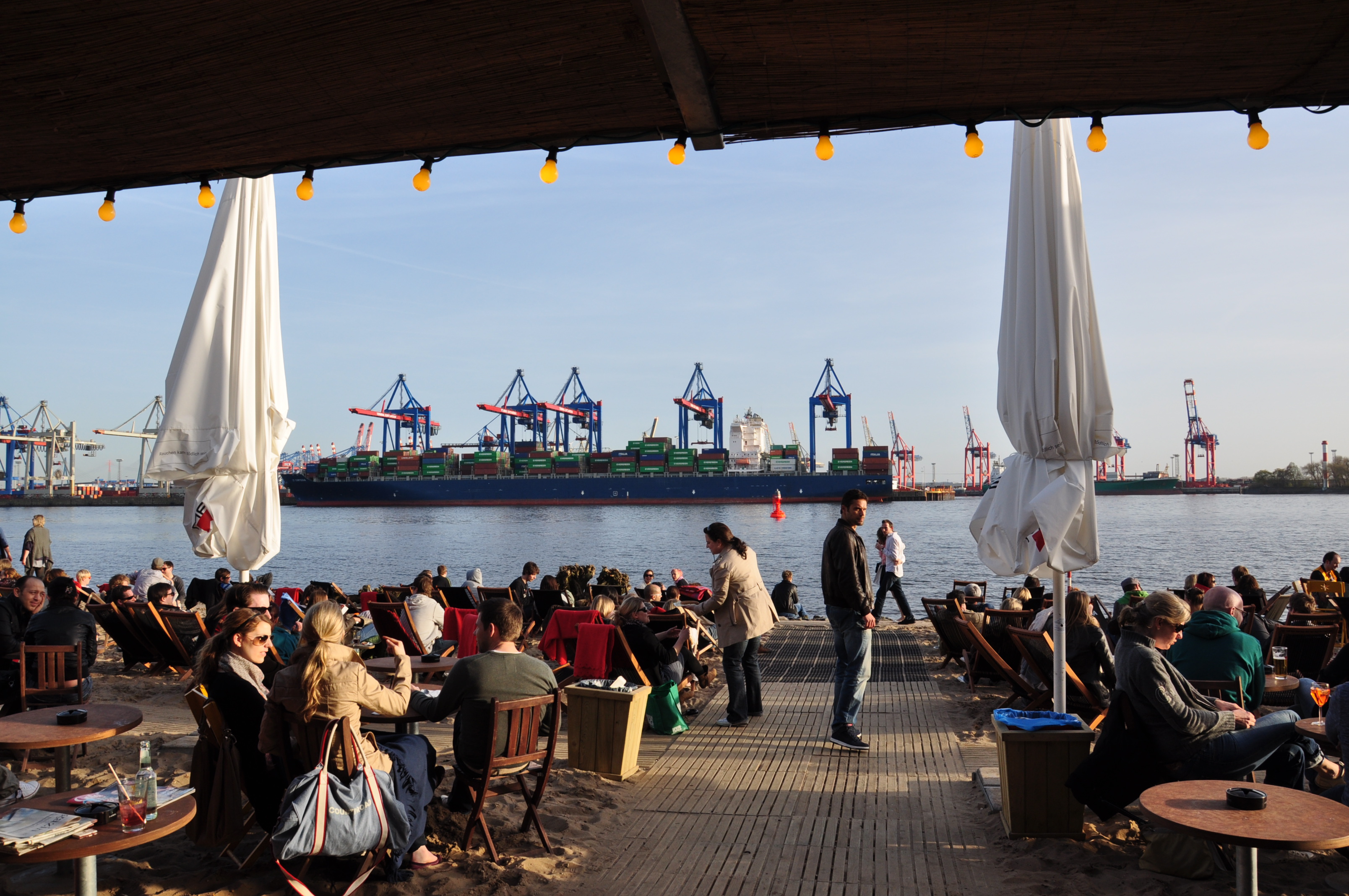 “Hamburg offers more than 1,200 restaurants, with countless culinary highlights waiting to be explored,” said Hamburg Tourism Board. “Trendy restaurants and celebrity cooks discover Hamburg’s city centre. Til Schweiger, one of the Oscar-decorated stars in the Hollywood blockbuster Inglorious Basterds, opened his first restaurant Barefood Deli in the heart of Hamburg, as did Germany’s most popular television cook Tim Malzer. He surprises with his first daytime restaurant Die gute Botschaft, lushly located on the shore of the city’s Alster Lake.

The board also let us in on a secret: “A real insider tip is the Große Elbstraße, also called Elbmeile. This is the place to be for all fish and sea food lovers. Visit the Seepferdchen am Hafen, the Fischereihafen Restaurant or the very traditional Fischerhaus, where it is all about fish!  Also try original dishes like the Hamburger Pannfisch or Labskaus.”

On the best place to try Franzbrötchen, Hamburg Tourism Board said: “There are many stories about the origins of Franzbrötchen. Maybe the Hamburgers were trying to create a croissant or a fried baguette – the result still belongs to Hamburg as much as the city coat of arms. One of the best Franzbrötchen can be found in the Kleine Konditorei in the district of Eimsbüttel.

If you’re eager to sample the best of Hamburg cuisine but want to make the most of your time, consider a food tour with Eat The World. Founded in Berlin in 2008, the company aims to show visitors and locals the way to eat delicious food and experience new cultures. Now offering tours in 35 German cities, this is an excellent way to explore a new destination.

“We aim to give our customers a non-touristy insight into life behind the scenes of a city,” said Ana Katovcic of Eat The World, “which we believe not only includes background information on its history, architecture and entertainment, but also the cuisine and small businesses in the area. Each tour includes delightful samples from classic restaurants to smaller diners, as well as an insight into the city’s history, culture, architecture and entertainment.

“Genuine diversity is very close to our hearts, a fact we would like to get across to you by way of an all-embracing look into each particular district: who used to live there? How did the neighbourhood develop? What do the people there eat? Where do they go? How do they live? On our tours, we make unfamiliar everyday life interesting.”

When it comes to Hamburg, fish is a big deal, according to Ana. She said: “A traditional and delicious snack for fish lovers is the fishbrötchen, a sandwich commonly prepared with soused or pickled herring accompanied by fresh white or dried onions and remoulade. You can get it almost anywhere near the harbour. If you like fish, you should definitely try it! Another speciality is fliederbeersuppe – a sweet soup made of cooked elderberries. It’s a very old recipe that is very popular with kids and adults in the north of Germany.

“In general, the culinary repertoire in Hamburg is rich and differs from one district to another. That is why on our tours we focus on different parts of the town. The famous entertainment district of St. Pauli, for example, varies a lot from the old glamorous district St Georg – and that is also reflected in the food.”

No matter which day of the week you visit Hamburg, you’re almost guaranteed to stumble upon a food market. “There are weekly markets like the original Hamburger Fischmarkt every Sunday morning, the Food Lovers Market at the Überseequartier in the new modern HafenCity every Tuesday,” said Hamburg Tourism Board.

“At the Spielbudenplatz in St. Pauli every Wednesday the St. Pauli Night Market takes place and every Thursday the Street Food Session is held and offers delicacies from all over the world. There is also an over-roofed market at the Rindermarkthalle which is open Monday to Saturday. For regional food you should visit the Marktzeit in the district Altona and the Eco Market in the district Ottensen.

“As a popular city for food trucks, Hamburg hosts different food festivals like the Food Truck Festival in September.”

Once the central market for cattle and sheep, Rindermarkthalle is a bustling food market in the heart of Hamburg. The market’s spectacular design and array of stallholders draws in local and international visitor who are eager to sample some of Germany’s finest cuisine. Sculptor Ernst Hanessen created ceramic displays of cattle market scenes which are integrated into the fronts of the stairs to the building’s upper floor, so look out for signs of the building’s history.

Stephan Wolter, centre manager at Rindermarkthalle said: “Since its opening in September 2014, the Rindermarkthalle (cattle market hall) offers an exciting journey through Hamburg’s food cosmos. The market is located between Schanzenviertel – a trendy area known for bars, restaurants and fashion shops as well as its rather left-winged political scene and St. Pauli stadium.

“Wherever you look there is no trade of standardised coffee shops or fast food chains. You will find German classics like currywurst or döner kebap (Turkish but actually invented in Berlin) but also top class sushi or hipster-crepes. While exploring the buzzing areas next to famous Reeperbahn the Rindermarkthalle is a must-see culinary stop-over.” 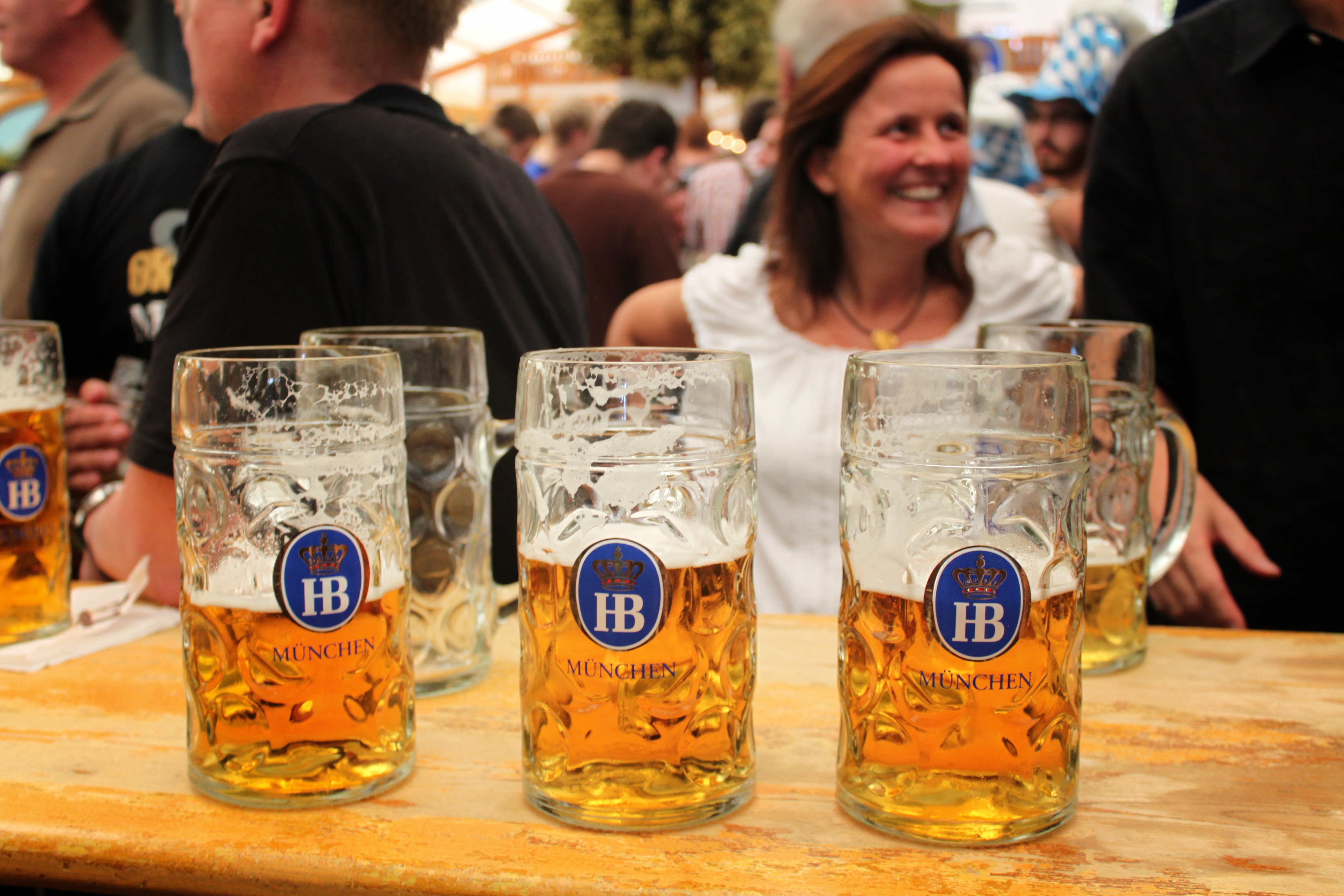 It’s almost impossible to think of Germany without picturing those perfect glass tankards of beer. Synonymous with German cuisine, traditional beers are now being served alongside craft beer creations. Typically if you sit down at a bar or beer hall, you will be faced with a tasty selection of German specialties, including weissbeer (wheat beer) and darker, full-bodied beers.

One of the best places to sample beer is in a traditional beer hall, such as Blockbrau. This particular venue seats 1,000 and serves a selection of beers, including its own brew. Pair your beer with delicious German snacks and if you just can’t decide, ask the staff for a recommendation. Alternatively, head to Groninger Privatbrauerei, which claims to be the city’s first wheat beer brewery.

In North Eastern Germany, the colourful seaport town of Rostock offers traditional Mecklenburg cuisine. Overlooking the Baltic Sea, the town utilises its bounty of seafood. Described as ‘rich and hearty’ by the German Food Guide, Rostock is a perfect stop for foodies wishing to sample some of Germany’s traditional fare.

For those interested in seafood, Rostock’s regular haul includes herring, mackerel and flounder. Ana Katovcic of Eat The World said: “In Rostock we would definitely recommend some freshly caught fish from the Baltic Sea – for example the delicious kutterscholle that you can get from the local fish market.”

Rostock and Warnemünde Tourism said: “Fresh fish is available in all varieties: fried, baked, steamed and smoked. Depending on the season, the current fish is particularly in demand, such as in spring, herring and in autumn, cod. The best combination to fish is a pint of Rostocker lager and a caraway schnapps -‘Mann un Fru’.”

Just 10 minutes away sits the picturesque port town of Warnemünde. This maritime hub is also famous for its seafood and is home to a charming local fish market. Rostock and Warnemünde Tourism added: “The fish market directly at the Middle Pier and the Alter Strom and the fish market near the city centre (Marienehe district) are highly recommended. There are also many fish restaurants in Warnemünde and the city harbour of Rostock.”

Some of Rostock and Warnemünde Tourism’s top restaurant recommendations are:

There are also a few breweries to visit:

Away from the culinary delights of the town, be sure to visit the home of Norwegian artist Edvard Munch, who painted the iconic piece, ‘The Scream’.

However you decide to experience northern Germany’s culinary delights, we’re sure you’ll love exploring the sights and tastes on a Baltic cruise.